Postcards From the Edge: Virginity 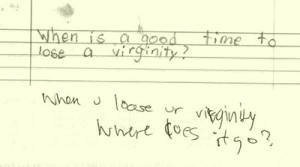 Students are asking me less and less often about virginity because we don’t use the term that often these days. But because it still comes up every now and then in the classroom, let’s discuss.

I think the concept of virginity is outdated and useless for a few reasons. First, it’s based on misinformation about female anatomy. When I first started teaching in the late 90s, a virgin was simply defined as a person who had never had vaginal sex. It was also assumed that first time vaginal sex would tear her hymen and cause bleeding. And if a woman didn’t bleed the first time she had vaginal sex, then clearly she wasn’t a virgin.

We know now that this isn’t true. Some girls are born without a hymen, and some hymens get torn and stretched painlessly and without bleeding long before sexual contact. So stories about woman having their “cherry popped” the first time they have vaginal sex are garbage. That ugliness is much more about ignorance of female anatomy than about virginity.

It’s also worth letting our children know that no one, not even a doctor, can say with absolute certainty whether a person has or has not had vaginal sex. Of course, the presence of sperm or semen, STI organisms or bruising and tearing in or around the vagina may be an indication of vaginal sex. But maybe not. Pregnancy can happen without penetration and isn’t an indicator.

I also find the saying “losing” one’s virginity very sex negative (is that a thing? You know what I mean.). In a healthy, consenting sexual relationship, there’s nothing to lose and lots to gain, like pleasure, intimacy, fun, stress relief and physical and emotional connection with another human.

Lastly, I don’t get the point of the concept. Really, who cares if a person is a virgin? And if a person wants you to know about the kinds of sex they’ve had and haven’t had, they’ll tell you! End of story.

This site uses Akismet to reduce spam. Learn how your comment data is processed.

Sarah is also the Program Manager for Saleema Noon Empowerment Foundation, a non-profit organization that exists so that every child in British Columbia can have access to empowerment education, regardless of their financial and life circumstances. When Sarah’s not in the classroom, she likes to write and rearrange her houseplants. Her vast array of dad jokes and meme knowledge make her a hit with every audience.

Julie received her Bachelor of Arts in Sociology in Alberta where she specialized in studying Masculinity in Canadian Sports. After travelling the world surfing and snowboarding, she found herself in Mexico teaching at an alternative school while also supporting and encouraging disenfranchised girls to try surfing and stand up paddle boarding. Her work with youth in Mexico inspired her to return to her studies at UBC and to pursue a Masters degree in Education as well as her teaching degree in primary French immersion. Passionate about empowering girls from diverse communities, Julie finds dividing her time between her own classroom and facilitating sexual health workshops at schools throughout the lower mainland to be the perfect combo.

When she is not teaching or studying she can be found on a mountain bike, on her snowboard, or sleeping in a tent…anything to get into nature in and around the Pacific Northwest.